I also found this adorable amigurumi pumpkin pattern on Ravelry by Karla Fitch.  It was a very well written pattern and easy to follow.  It worked up very quickly, and I love how it came out.  It's currently the centerpiece on my dining room table, and I hope to make a few more soon. 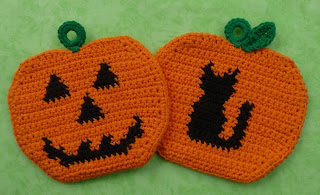 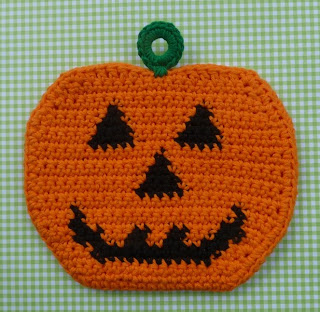 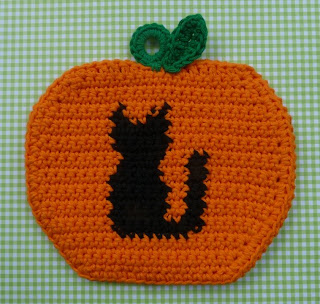 After buying several real pumpkins last week, I decided to crochet some for my kitchen.  After finishing the Jack-O-Lantern pumpkin, I decided I needed a black kitty one too.  It's just not Halloween without the black kitties. :)  Pattern set is available in my Etsy Shop
Posted by Doni at 4:38 PM 2 comments: Links to this post

I'm getting ready for Halloween with this fun set of Boo! Coasters.  Hope you enjoy!  :)
Click download link below to get pattern pdf.

I'm talking about kittens!  We adopted Gus in early March, and he was about 8 weeks old.  Right from the beginning he really liked to sit on my husband's lap.  I took a picture of this soon after we got Gus, and then took another picture this past week.  I knew he had gotten big, but I was still surprised at the difference. And I don't think he's finished growing yet.  :)

I'm Getting Ready for Fall!


A few weeks ago I was at Hobby Lobby and they had these really adorable ceramic pumpkins with a monogram painted on them.  And they were 50% off!  I thought it was my lucky day until I realized they were all out of my letter. So I decided to figure out a way to make my own.  This past weekend, a nearby farmer set out a wagon full of his first batch of pumpkins for sale.  I was looking for one that was on the tall side, and found just the right one.  Using the Word program, I typed in the letter S, enlarged it to size 650 font, then clicked to make it bold.  I printed it, cut it out and taped it to my pumpkin.  I traced around the letter, then using black acrylic outdoor paint (got it in the craft dept at Walmart), I painted it.  The hobby lobby pumpkins had some really beautiful swirly designs around the letter, but I'm no artist so I had to improvise on that part.  I took a ruler and drew a straight line (well as straight as I could get it on a bumpy, rounded pumpkin) above and below the letter.  Then I took a quarter and traced a partial circle on the ends of each line.  To finish it off, I painted a dot inside each partial circle using the end of my paintbrush.   I then painted vertical wavy lines on each side of the letter. It's definitely not perfect, but I'm a pretty happy camper. I got the monogram pumpkin that I wanted and I don't have to find a place to store it at the end of the season.  :)
Posted by Doni at 3:04 PM 1 comment: Links to this post


In an earlier post, I showed a potholder with a daisy in the center that I was making for a potholder swap.  I really liked how the daisy turned out and wanted to use it in a new design.  Because the petals on the daisy are raised and textured, it seemed meant to be a dishcloth and scrubbie.  So after playing with yarn for the past few weeks, this is what I've come up with.  The scrubbie has a front and back piece, with a handle stitched to the back. And since it's double thickness, it could also serve as a small potholder.

I also made a set using the new denim colored cotton yarn that Lily's Sugar 'n Cream has come out with.  They have 3 shades, and I used the lightest one called "stonewash".  I really like these denim colors and hope to use them again soon.
Pattern available in my Etsy Shop
Posted by Doni at 10:57 AM 2 comments: Links to this post

I talk a lot about Gus, because that cat is always up to something, and gives me lots of material. :)  But we also have a sweet kitty named Grace.  She is almost a year old now, and she was about 5 months old when we adopted her from our local animal shelter. She's a bit skittish, and shy, and nowhere near as boisterous (or ornery) as Gus is.  She has a very sweet and quiet personality, and although she doesn't get into things like Gus does, she is usually his little sidekick, observing all his antics (I hope he doesn't corrupt her) :). Here are a few pictures of our little Gracie.

As I've mentioned before, life with Gus is never boring.  I always have my camera nearby, because he's always up to something.  He's a  little big brat, but he's also adorable, lovable, and makes us laugh everyday, and we sure love having him around.  :)