Summer will be here soon, and what better for your cold drinks than a set of cheery daisy coasters.  :)

Coasters are made using worsted weight 100% cotton yarn and finished size is about 5" across.
Click on the "download now" link below the top picture to get the pattern pdf. 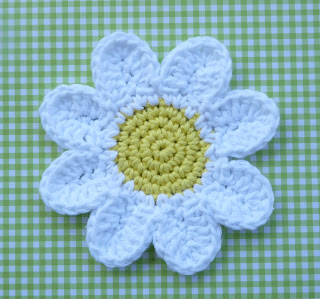 Eli turned 1 last month, but I've been so busy working on a new pattern that I haven't had time to post about the birthday projects my mom and I made.  Eli loves monkeys, so that was the theme of the party. Unfortunately, I forgot to bring my camera to the birthday party, so I wasn't able to get any pictures of Eli with his birthday goodies.

My mom made him this sweet little 1st birthday bib.  She used McCall's Crafts pattern M6368, and embroidered the monkey from a design she found at www.emblibrary.com . 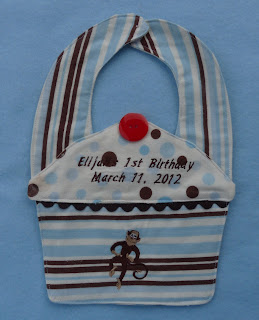 I made a birthday banner, but it is so long that I wasn't able to get a good photo of it, and you can't really see it in the first photo.  It has a monkey at each end to "hold" the banner, and it says "Happy Birthday Eli".  I took a close up picture of one of the monkeys and of the Eli section of the banner to give an idea of what it looks like.
To make it,  I found a cute image of a monkey online and drew it out and made it from cardstock.  I used markers to color in the face features.  I also added a little balloon for one monkey to hold that says "Eli is 1"(I straightened out a paper clip to use for the ballon's string).

For the banner's words, I use an alphabet clipart set I found on etsy.  The set is so cute, and included both blue letters with white polka dots and green letters with white polka dots. This was the first time I've used clipart, and it worked well, and was a lot of fun.  And it was only $1.45 for the whole set!  I printed each letter out on white cardstock and matted on brown rectangle shapes, then punched holes in the top of each rectangle to thread the ribbon through. 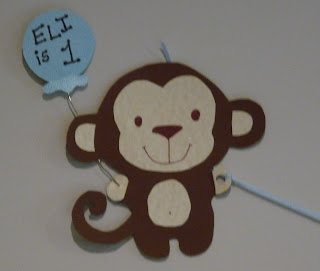 And of course, Eli needed  birthday hat!  I found a really cute party hat template on the blog Oh Happy Day. I printed out the template and cut out of cardstock, and decorated.  I printed out the "1" using the same clipart that I used for the banner.  I punched tiny holes on each side and tied elastic cord for the strap. 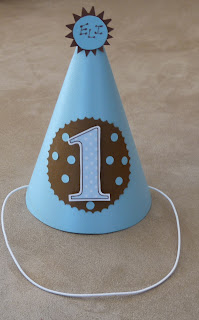 And as part of his birthday gift, I made Eli a little monkey using Rebecca Danger's Jerry the Musical Monkey knitting pattern.  This pattern was so much fun to make!  And Eli loves him! The only change I made was to use black felt for the eyes instead of plastic eyes. 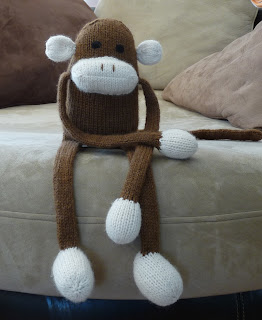 I don't have any birthday pictures to share, but here is Eli enjoying spring break a few weeks ago in Florida.  He loves being outside and he had a hard time last week understanding that he is now back in Indiana and it's not always warm enough to play outside every day.  :)