I've been working on several projects lately, and here are a few of the finished ones. I still have a few more on the hook (and needles).  :)

Eli and I did our first craft project together.  We used fingerpaints and made a handprint picture for his mommy for Mother's Day.  Big suprise, he really likes using fingerpaints!  It was a very messy project, so we were lucky to have Grandma on hand to help, because it took our four hands to keep up with his two hands.  It was worth it though, because his mommy loved it!  :) 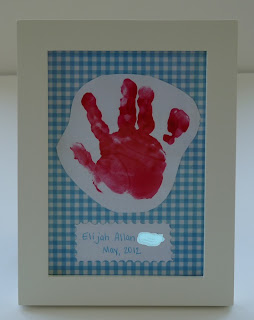 I made a pair of Turkish Bed Socks from a pattern purchased off of Ravelry.  I gave this pair as a gift, but I liked them so much that I have another pair on the needles for me.  :) 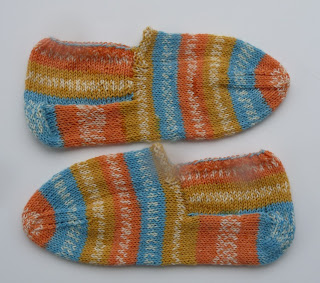 These deer hats have been very popular with my husband's family, and I keep getting requests for them.  I think so far I've made about 10 of them.  I have never made so many of one thing before, and hopefully this is it for a while.  :)  It's a basic hat pattern and uses a free chart on Ravelry called Fornicating Deer. 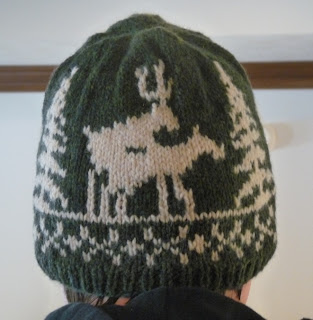 And I had to throw in this picture of Olivia that I took the other day.  She was so conked out, and the way she was sleeping just made me laugh.  I believe she must have wore herself out from all the mischief she had been in.  Being ornery all day long can be exhausting work!  :)

The other day I was working up a batch of my Simple Stripes Dishcloths and it occurred to me that a smaller version of these might make a nice coaster.  They are thick and absorbent, which makes them great for all those cold summer drinks.

This is a very quick and easy project and a great way to use up all those leftover scraps.

Each coaster takes 15 yards of white and 4 yards for the stripe color.

Since little Eli is such a monkey fan, I designed this monkey onesie baby blanket with him in mind. :)

The blanket is made of 4 blocks that are made by working color changes to stitch the onesie design into the block. The monkey face and other appliques are made separately and stitched to the onesies.
The onesie blocks are stitched in single crochet, and the borders use half double crochet and double crochet.

Pattern is $4.25 and is available in my etsy shop 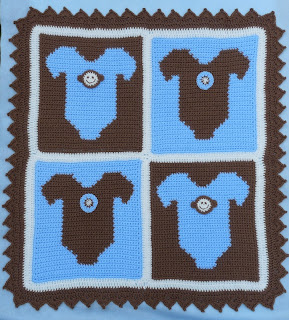 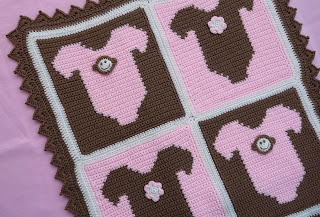 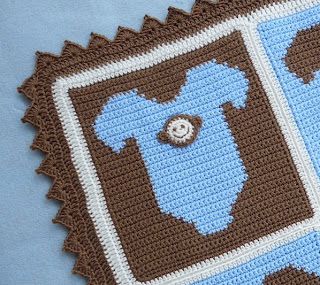 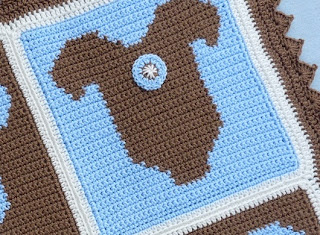 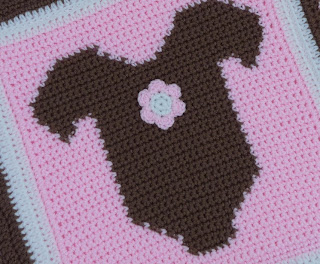 A Couple of Goofy Cats and a Close Encounter


About a year and a half ago, Gus dug around in some of my husband's things stored in our basement, and found a parachute string (I have no idea why my husband has parachute string).  This string became his constant companion and favorite toy, and I posted about it here.  We dubbed it his pet string, because he was obsessed with it, and was either dragging it along with him everywhere he went or he was sitting by it, patiently waiting for someone to make it move so he could chase it.  As time went on, he still carried it around a lot,  but he didn't seem as into it as he used to be.  We thought he was growing up.  :)  But nope, that wasn't it.  Turns out the old string wasn't as much fun because it was getting a bit ragged and had also gotten much shorter because he likes to chew on the ends.  A few weeks ago, my husband gave him a brand new, identical string and he's like a kitten again.  And he's driving us crazy all over again, constantly wanting us to play with that darn string with him.  If we are sitting in a chair, he'll stand up on his back legs and reach up and tap us on the leg and meow.  If that doesn't work, then he'll jump up on our lap and then jump down real quick and run over to his string hoping we'll take the hint.  And heaven forbid if you even glance his way when you walk by.  We play with him a lot, but he just never tires of it. I think we may need to sign him up for a support group.  :)

And as if one goofy cat wasn't enough, there's Olivia.  And she has her own obsession.  I have a large size Vera Bradley bag that I use to haul my laptop around.  Every single time she sees that bag, she is compelled to get inside of it.  The other day I had it hanging over the back of a chair, and I noticed when I walked by that the bag was moving.  Sure enough, even hanging from a chair, she had managed to get inside of it.

We have a little fox family in our neighborhood and the mama fox has been visiting our yard occasionally.  I haven't seen any little ones, but some neighbors say she has a litter.  She's a pretty little thing, and very skittish.  One of the neighborhood cats was taking a nap in our our yard one day when she stopped by.    As I watched out the window, she just walked up to him  and sat down.  He was not a happy camper and was very tense.  She, on the other hand seemed quite relaxed....a little too relaxed.  So just in case she was sizing him up for dinner, I walked outside and she ran away.  :)
She still shows up every now and again, and I hope one of these days she'll have those babies along with her.  :) 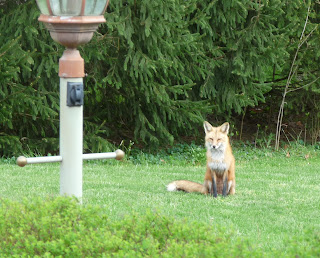